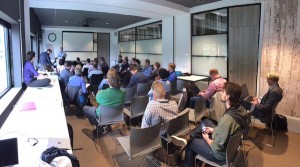 On September 28, 2015, 40 representatives of Odex4all’s private and public partners came together to discuss the project’s progress, both from a technical and a scientific perspective. Odex4all is co-funded by the Dutch research council (NWO) and the Netherlands eScience Center and contributes to the interoperability theme of DTL Data. The project is closely linked to the FAIRPORT initiative in terms of ensuring that all data published in the scope of the project is FAIR.

Technical update
The tech team presented several tools, starting off with the triple annotator, a tool that allows the annotation of individual triples in the ODEX4all graph. The engineers also showed a bookmarklet that identifies RDF-A elements in web pages and can send them to the triple annotator, and a FAIR Data point.

New partners
Since the kick off meeting in April four new private partners have joined the project: Breed4food, VLPB, Bayer CropScience and IOS Press. The Odex4all project is set up as a public private partnership, with private partners contributing in cash or in kind to specific use cases, therefore each new partner presented a individual use case. Discussing all use cases that were brought in by the private partners led to the identification of several generic and synergistic research questions.

Next steps
During the meeting it was decided that Odex’s scientific team will describe all individual use cases, and create an overview of the additional data sets that need to made FAIR through Bring Your Own Data workshops. The scientific team will work closely with the engineers in setting up a roadmap for the next steps of the Odex4all project.