On 8 March 2016, more than sixty professionals involved in Next Generation Sequencing (NGS) gathered in Utrecht for a DTL Focus Meeting. “This was the first official event organised by the newly established DTL NGS Interest Group and it was quite a success”, reports the Interest Group’s chair Leon Mei.

The focus meeting featured six invited speakers that shared their experience with Oxford Nanopore Technology (ONT) and PacBio data. Registration for the event was full within a few days. “The subject is indeed addressing a hot topic in the community”, says Leon Mei from DTL partner LUMC. The meeting was hosted by DTL partner SURF in Utrecht. Less than 20 participants had actual experience with ONT or PacBio. 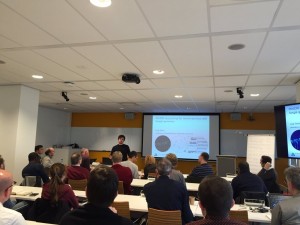 MinION
Hans Jansen (ZFScreens) first gave a general introduction of ONT. Next, he shared his story of participating in the MinION Analysis and Reference Consortium. This consortium is evaluating the MinION platform’s error profile and reproducibility. With R7 chemistry, the error rate is still 10-13%. The upcoming R9 promises error rates around 5%.

Microbes
Malbert Rogers (UMC Utrecht) and Luigi Faino (WUR) narrated about using ONT to study microbial genomes. Malbert reported a slightly higher error rate in his use of ONT, indicating that small groups should be aware of the quality difference between different ONT devices. This is because the manufacturer of this kind of new technology is still in the continuous process of improvement. Luigi’s presentation focused on the problem of scaffolding and gap-filling when using ONT to assemble bacterial genomes and transcripts with a new tool called ‘GruS’. This tool resembles the features of PBJelly for PacBio.

Tulips
Christiaan Henkel (Leiden University/Generade) presented his plan to use a mixed technology (ONT, BioNano, PacBio) to sequence the tulip genome. This project may have a notable impact on the Dutch horticulture sector.

Success
Leon Mei concludes: “Overall, this focus meeting was a very informative afternoon. All participants enjoyed the presentations as well as the networking during the coffees and drinks. As a follow-up event, we will organise a workshop on this subject at the upcoming ECCB 2016 conference (3-7 September 2016, The Hague). Here, we will extend the discussion to involve speakers from technology providers and international participants.”