The workshop’s aim was to produce FAIR nanopublications. FAIR is an internationally adopted standard for data and it means Findable, Accessible, Interoperable and Reusable. Nanopublications are the smallest publishable unit of facts with full information where the knowledge comes from. These units can be used for analysis by bioinformatics tools. 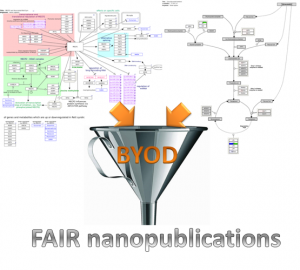 During the workshop, academic and industrial researchers from Spain, United States, France, and the Netherlands worked together on several projects. The team succeeded in extracting nanopublications for molecular interaction (pathway) databases like WikiPathways and defined and published a standard for future nanopublications based on pathways. Additionally, a search and filter programme for nanopublications from other databases was created and a first overview gave an impression of how much nanopublications are already available for Rett Syndrome related research. (For the MECP2 gene there were about 2500 available, for Rett syndrome 1000.)

But the analysis also revealed a lack of available nanopublications about the different MECP2 mutations. Together with the Leiden Open Variation Database (Henk van Kranen, LUMC) we intend to solve this problem. An important step was also done in making the Maastricht Rett Database interoperable by transferring the data into a compatible format. A first version is established in a local (offline) version. The BYOD participants were able to make links between the databases they worked on, allowing questions to be answered which cannot be answered with any of the isolated databases. During the workshop there were several general presentations of Rett syndrome information, bioinformatics tools and databases, as well as progress discussions.